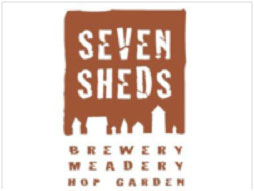 Brewery tours are available Wednesday to Sunday at 12pm and must be booked and confirmed at least 48 hours prior.
Seven Sheds cellar door is also available on line at www.sevensheds.com/cellar-door

The Seven Sheds Tasmanian Brewery and meadery is located on a property in Railton, in Tasmania’s north-west, comprising, you guessed it, seven sheds. After purchasing the property in 2003, owners Willie Simpson and Catherine Stark opened this Tasmanian brewery in 2008.

Seven Sheds beers are distinguished by their artisanal, “hands-on” approach and small-batch brewing methods (1,000 litres or less per brew) using traditional brewing techniques including open fermenters and a secondary fermentation in the bottle and keg.

Inspiration comes from many sources including English and Belgian beer styles and locally-sourced ingredients such as quinoa, organic oatmeal, ginseng, berries and stone-fruit. Tasmanian barley and hops are featured in most of the brews, including Leggett and Fuggle hops grown on-site.

The regular line-up at the Seven Sheds Brewery includes up to five beers for tasting and by the glass, usually:

A golden ale designed for relaxing with friends on sun-drenched afternoons;

A refreshing “fruit tingle in a glass” brewed with locally-grown raspberries and blackberries; wheat and barley malts and Seven Sheds Leggett hops;

Brewed with a chocolate malt and infused with star anise and cassia bark, designed for winter drinking;

Inspired by the Belgian Trappist ales, a great brew to enjoy while strapped to your favourite armchair.